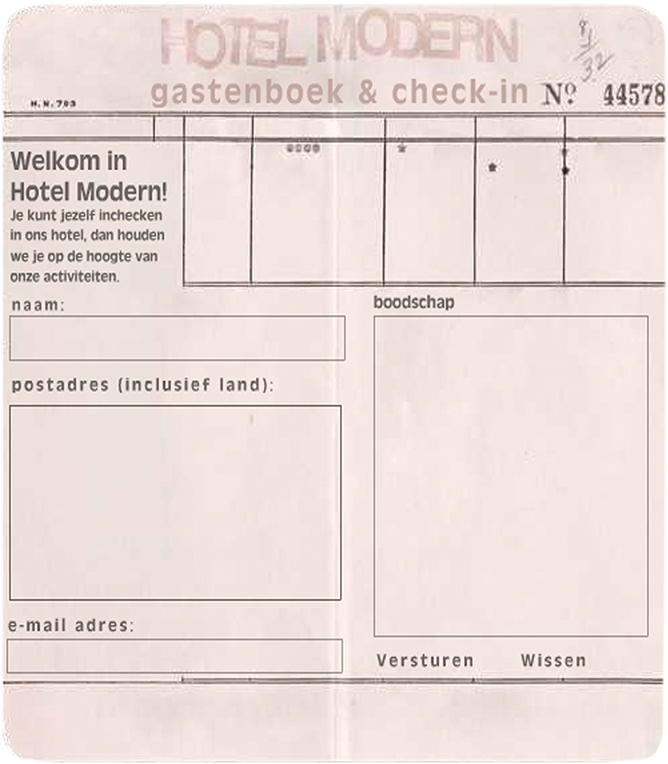 Theatre of the Real

In terms of theatre, perhaps it is only at this moment in history that we can have a documentary without documents because theatre that presents reality by means of specific citations has become an operative idea, a mindset, a familiar way of framing the world that tells us this happened, this is real, this is the truth, or at least a part of the truth because ‘we are dealing with reality here’. […] Kamp depicts a day and a night in Auschwitz-Birkenau using 3000 puppets, each the size of a finger (approximately eight centimeters), dressed in black-and-white concentration camp uniforms. Kamp simultaneously stages the Holocaust in the theatre and on live-animation film during the performance. Both the live performance and the film take place in real time. The live-animation film consists of sequences shot with four small cameras, whose images are projected on a large screen behind the playing area. Diminutive puppet faces are enlarged on the screen and give a more personal identity, and by extension, survival, through this technical magnification. Spectators see the puppets’ faces and the events that happen in Auschwitz-Birkenau in close-ups captured by the camera and at a small distance in the theatre from the vantage point of looking down on many tiny puppets manipulated by the three puppeteers. The two domains of Kamp’s simultaneous live and virtual staging of the actions of emaciated, exhausted, and dehumanized puppet people inform one another. What is collectivized and perhaps dehumanized live is powerfully individuated on film. The film is a close-up of the live, and both the live and the film take place in front of the spectators.

The environment of Kamp consists of what appears to be a painstaking scale model of Auschwitz-Birkenau. It is, in fact, not a scale model but an extraordinary combination and conflations of the two camps; the model is an approximation based on visual and experiential assessments, not mathematical measurements. ‘We started with scaling the puppets which had to be big enough to be seen by the audience. Then we adjusted the scale of the buildings. The problem was that the stage was not going to be big enough to show the whole camp using this scale. So the ‘real’ thing [the real stage set] had to be much bigger than what we are able to show on stage. There are more gas chambers and crematoria-buildings, and more barracks than are included in our model, for instance,’ explains company member Pauline Kalker. An accurate scale model would result in an environment too small for spectators to see the action, as the model has to fit in the ten-by-ten-meter-theatres where Hotel Modern typically performs.

Helle designed the model for Kamp using decisively homemade aesthetics, with materials such as cardboard boxes, rescaled in miniature so that the puppeteers and the spectators loom large over the action and its environment. The camp gallows is a tiny, simple wooden post-and-lintel structure with wire hangman nooses. The train that pulls into the camp to unload its doomed puppet passengers is not unlike a child’s model train. The sign Arbeit Macht Frei on top of the gate to Auschwitz is splayed in a mockingly lyrical arch that lights up during the foreboding night at the camp. There is the infamous guard tower that stands over the train tracks in Birkenau. From the moment spectators enter Hotel Modern’s performance space, the camp onstage is in plain view.

But whose memory does Kamp enact? Keeping traumatized memory alive beyond the authoritative witnesses of the Holocaust has led to attempts not only to record words and images but also to make re-creations of the experience of the camps in order to build a new generation of witnesses. Despite its use of live-animation, Kamp is anti-technological, because the labor of creating the work is painstakingly exposed. Its positioning of spectators as a new generation of witnesses to the Holocaust happens because the miniaturization and the ‘thingness’ of the puppets and the environment are communicated as felt experience in relation to the perception of difference of one’s own size in relation to that of the puppets: large and powerful versus tiny and frail.

In theatre, actors and spectators are present at the same time and in the same location; everything the audience see and hear is actively produced in their presence by human beings or props which are themselves present. In cinema, the actors were present when the spectators were absent (at the shooting [of the film]) and the actors are absent when the spectators are present (at the projection). […] What defines the rules of looking specific to cinema is the absence of the object seen.

In addition to Connerton’s distinction between physical and literate culture we might consider that while actors and spectators are present in the theatre at the same time, not everything the spectators see and hear is produced in their presence. Alice Rayner writes about how the stage crew is responsible for managing the illusion of what passes for reality. The visible spaces in theatre, Rayner writes, are produced by the unseen presence of the backstage. Backstage – offstage, or ‘ob-scene’, is the place where the secrets of staging the real thing operate (2001:538).
The real world is typically understood as outside the theatre (536). But Rayner proposes that there is a real that is housed only in the theatre itself (537). The willing suspension of disbelief that enables spectators to receive what happens on stage as real comes with an ideological contract that ‘prohibits an acknowledgement of the backstage life that includes the stage manager, light and sound operators, dressers, property managers, curtain pullers or make-up crews: the technicians and stage hands of theatrical production’ (537).

Kamp uses both incorporation and inscription with its dual use of the live physical presence of the puppeteers and the simultaneous live-animation film. The performance demands that spectators see the objects, the puppets, as physically present both in the theatre and in the live-animation film as, contrary to Connerton’s assertion, both the actors and the spectators are present at ‘the shooting’ of the film as it is projected in the theatre. Kamp is post-illusionist theatre. ‘We want the audience to see us. We deliberately do not dress in black. We do not think of our presence as an interruption but as part of how we are going to stage the work. We want to show the illusion and how it was reached,’ explains Kalker. This approach is in accord with Bertolt Brecht’s desire to show the lighting instruments and the stage machinery, the ‘work’ of the theatre. The three members of Hotel Modern, Kalker, Helle, and Arlène Hoornweg, are at once the live puppeteer performers and the makers and witnesses of the live-animation film as well as the stage crew. The openly manipulate the puppets, the concentration camp environment, and the four miniature cameras used throughout the performance. ‘Structurally, Kamp alternates sequences in which the puppeteers move within the set, preparing the figures for the next scene, with the scenes themselves’ (Cherry 2011:110). Once the performance starts, the puppeteers manage everything that enters and leaves the stage until the performance is over. The members of Hotel Modern intentionally did away with the stage crew’s conventional invisibility as they expose the labor of what they perform. Kamp is about approaching full disclosure and transparency of the process of making the live performance and the live-animation-film. They use bodily practice and digital inscription, the techniques of oral and postmodern culture, to banish theatrical magic in ways that are meant to expose what the Nazis tried to hide – the labor of creating the alternative reality of the camp.

The production tension of Kamp is one of visibility and absence, a theatrical tension crucial to theatre of the real in which the world outside the theatre is explicitly cited, quoted, simulated, and summoned in a variety of ways in addition to verbatim text: these include archival photos, film, and audio recordings. […] In addition to incorporation through bodily practice and inscription through literary, photographic and cinematic texts, theatre of the real can be made from memory contained in material objects.

Kamp reiterates and creates a cultural memory with its model of Auschwitz-Birkenau. In the same way the real Auschwitz and Birkenau function today as tourists sites of evidentiary status: the Holocaust happened and it happened here, on this ground, in these crematoria, and the other parts of the camps on display in their original geographical locations. More than a million people, mostly Jewish people, were outright killed, starved, and worked to death at Auschwitz-Birkenau. As a monument of the Holocaust and to those who perished in it, the camps draw over a million visitors each year. What does the performance of Kamp add to our relationship to the history, to a narrative of history that is already known? What can a theatre model of Auschwitz-Birkenau add to a world in which the actual camps still stand outside Krakow? What is the purpose of Kamp’s ritualized representation of history? What meanings does Kamp produce? Is it a work of memory, remembrance, mourning, moral education, national identity? Does miniaturization matter?

Kamp’s careful miniature representation of the real is in the form of a foreboding physical environment, an environment both familiar and exotic.

The ‘Studies in International Performance’ series was initiated in 2004 on behalf of the International Federation for Theatre Research, by Janelle Reinelt and Brian Singleton, successive Presidentts of the Federation. Their aim was, and still is, to call on performance scholars to expand their disciplinary horizons to include the comparative study of performances across national, cultural, social, and political borders. […] In formalizing the work of the Federation’s members through rigorous and innovative scholarship this series aims to make a significant contribution to an ever-changing project of knowledge creation.